I wrote a lot of words about why I think monero is awesome.

Please run your own node

Public nodes should be considered a last resort if you can't get your own node working. The entire value of a decentralized cryptocurrency is its decentralized nature. If you are a mobile user, you can even setup your mobile wallet to connect to your home node. Please, take the time to try running your own node, or perhaps just use a remote node until your daemon is synchronized.

When using a remote node, your wallet still needs to download the blockchain data. This is called "refreshing your wallet" and is done whenever you create, restore, or open your wallet.

Site updated 2021-01-21. If you see something that needs changing, ping me on IRC or whatever

New software has a new flag, --public-node , that is good to use if you are offering public RPC service. And the new software can find its own remote nodes! Hooray, the end of these centralized node listing services is soon!

REALLY make sure your open node is running with the --restricted-rpc flag. I left the explorer node open without the flag and someone started mining on it

For full description of attack vector, see above. If you see *ANY* error message after attempting a transaction, DISCONNECT from that remote node and DO NOT try your transaction again right away.* Note, this has apparently been mitigated as of 2021-11-16.

20191202 update - The below instructions can still be used, but for the most part, you should be using the boostrap mode with pruning in your Monero software.

To use remote nodes with the Monero GUI, include the node address under the Settings tab and be sure to use the proper port:

Some well maintained nodes by a community member.

To check that the above addresses are working, please checkout this website. If their are no type A records in the list, then there is something wrong with the DNS server maintaining that node list, and should not be used. The provided link checks out the moneroworld.com nodes. You can manually check the other domains by entering them on the website. You can also use that link to connect to a specific node instead of a random one. 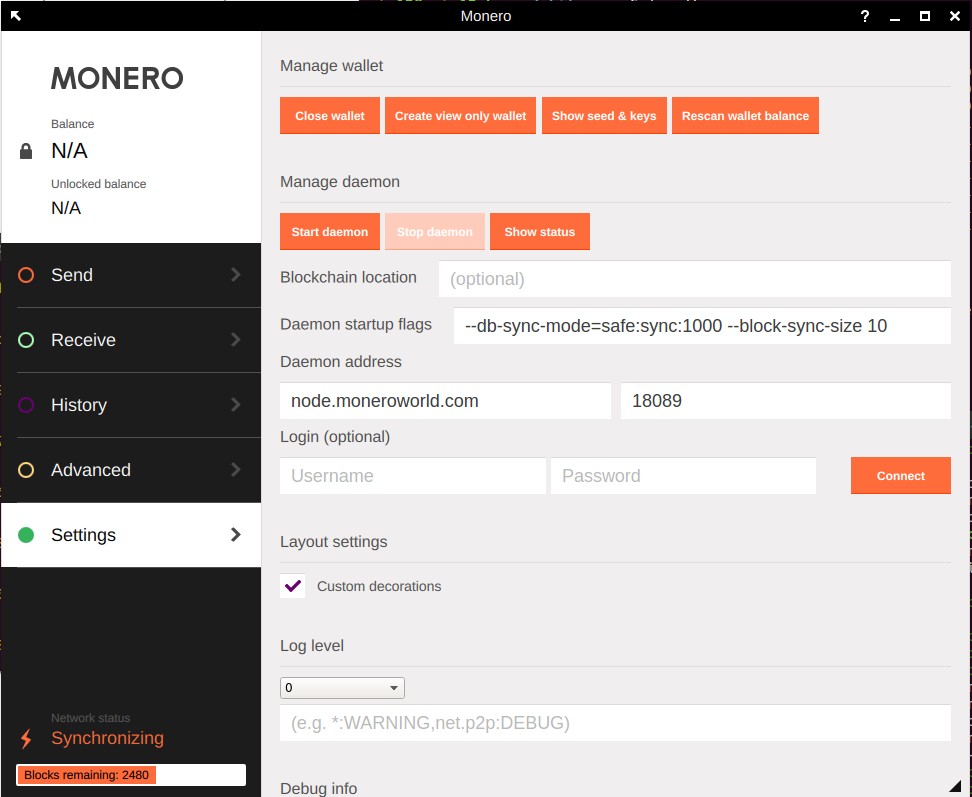 To use remote nodes with the Monero CLI, run the following code.

Collection of random open nodes consciously volunteered by other monerians:

Use the nodes listed under the GUI section in the CLI

node.xmrbackb.one:28081 should have remote access to a testnet. I think its master.

testnet.node.xmrlab.com:28081 is on testnet v6, so same as monero blockchain

testnet.node.xmrlab.com:38081 is on testnet v7, needs github master for access

For those that want to mine via i2p, you can with MoneroWorld.com. Instructions can be found at:

I will update this with a hostname once its registered. If you already know how to route via i2p, the mining port is:

Moneromooo coded up some stuff that basically creates a market economy for public remote node service. Your wallet connects to a remote node and does some mining for the remote node owner. So its "hash for service". As of now, you have to compile moneromooo's branch share-rpc on this repo: https://github.com/moneromooo-monero/bitmonero, and then use the monero-wallet-cli that you compiled. Then, simply connect to the node below using that wallet, and send the start_mining_for_rpc command. You can use rpc_payment_info to see your credits. A credit gets you an increase of 1 in your balance. Each RPC has a certain cost, which is currently handwavy, but will be based on the realtive "work" the daemon needs to do. I'm really excited about this, because we could see a self-sustaining public remote node infrastructure build up. In essence, the public remote nodes become mining pools. So, please help test this if you can. I am running one of the high-speed dedicated nodes for this service, so if you want to give it a shot, please try it out. Why do I like it? It builds the infrastructure and may put a dent in mining pool centralization.

This is the stuff in the code, and a readme

I have to rewrite all this stuff after this

If you want to accumulate credits, use the following command when you start monero-wallet-cli --rpc-client-secret-key insert-random-64-bit-hex-string

If you want to offer your own premium node, just compile the same branch and run the daemon with the obvious flags. NOTE - this version will convert the monero database to v3, which is incompatible with 0.12.x monero software

This has some advantages: And some disadvantages:

How To Run Your Node

You should really run your own node!

It's honestly not that hard - it can take 9 hours to synchronize if you have a SSD and a good internet connection. Also, remote nodes are NOT reliable, a lot of times they just won't connect because the software wasn't really developed for this.

Download your node software from the official website GetMonero.org and learn how to run the software here.

MoneroWorld runs a script every 5 minutes to scan the Monero network for open nodes.

How To Include Your Node On Moneroworld

THIS SECTION WILL BE REWRITTEN SOON. ALL YOU NEED TO DO NOW IS USE --public-node. There's even more fanciness with payments, so this section will get some work soon!!!

This is the stuff in the code, and a readme

I have to rewrite all this stuff after this


If you would like to offer your node up for inclusion in the Moneroworld Network of Open Nodes, you can simply add the code bellow to the launch of your daemon (and open your firewall), and the MoneroWorld script will sniff you out and add your node to the random list.

Offering your node as a remote node is above and beyond what you need to do to support the network! This is NOT necessary!!!

NOTE: For YOU.IP.GOES.HERE, this is your external IP. If this is a VPS or a database hosted server, its usually the IP of the box. If this is a home computer behind a router, its the IP of the computer itself, not the wlan on the router. You'll need to do some port forwarding. This setup also configures the UNrestricted RPC to bind to home, so only local commands can access the node unrestricated.

Below is a screenshot example of using the GUI to offer a remote node. Please note that you will have to use port forwarding for 18089 to the computer running the node.... but you should already know how to open your ports if you are running a full node and have 18080 open!!! You just need to enter this information into the Daemon Startup Flags field and then start your daemon. Also note that you may have to change your Daemon Address field so your wallet can connect to your node with its external bindings. 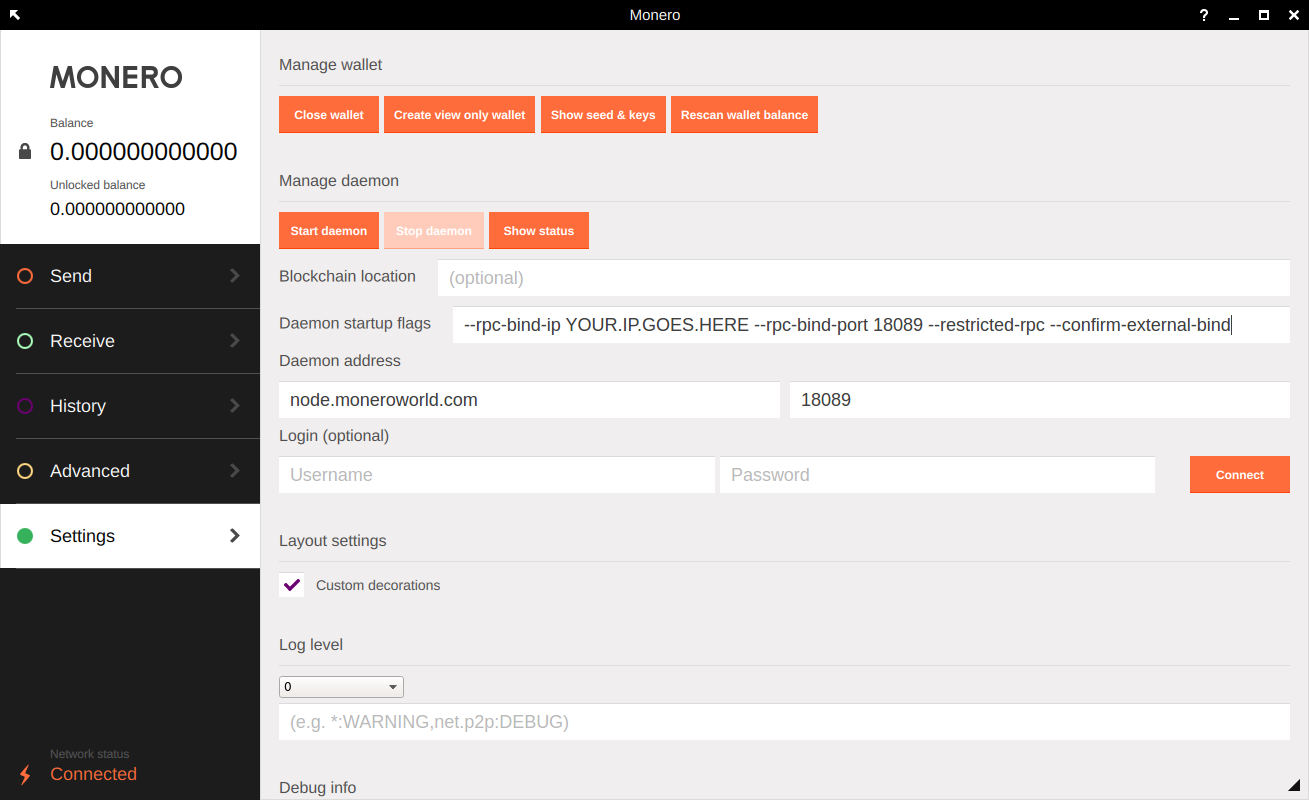 Run the script on your own daemon!

The current version of the script is on a fork from some other user. But basically, there's no need to trust any of the remote node lists provided by MoneroWorld or the other providers. You can run this script and scan your own peer list to find open nodes. You can also run this script and provide another list service! The more the better!!!

Please consider donating to keep the services running smoothly. I run some of the nodes and some are run by other volunteers.

What Is An Open Node?

The Monero software architecture allows for an easy way to use Monero without downloading the entire blockchain. This is called "using a remote node". Essentially, your wallet program connects to someone else's monerod (blockchain) program, a.k.a node, a.k.a. network service.

How does it work? The open node addresses actually point to many different nodes - when you request one, one in the list is selected. So if it doesn't work once, just try again.

It is negligently slower depending on the connection, prevents the need of downloading entire blockchain (which can be lengthy), and there is some information leak as detailed here. The best way to anonymously use a remote node is to use Monero with TOR or with a trustable VPN service.

That being said, no one can steal your Moneroj because you use a remote node. However, use these at your own risk.

Monero is the best cryptocurrency, ever. Seriously. 99% percent of the problems that other cryptocurrencies have, Monero has either fixed or the core team is working on fixing them soon.

Primarily, to me, the important thing is that Monero is fungible. One Monero can not be distinguished from another Monero. There is no transaction history. This is a fundamental principle of money. Anything that is inherently traceable (such as bitcoin) is not money - it is an asset. Privacy is a side effect of fungibility. Oh yeah, and the blocksize is scalable so Monero will NEVER reach a transaction limit imposed by the blocksize.

Monero is also decentralized due to the ASIC-resistant proof of work algorithm, therefore the network will never be controlled by a small number of entities.

Welcome! Getting started with Monero is not hard, but can take a couple of minutes. The Monero Stack Exchange is a great resource for beginners.

There are many ways to get a Monero address. The best way is to download and run the Monero wallet. This program is available at the official Monero website. There are also excellent guides on the official website. For more information on getting started with Monero, please checkout this MoneroEric.com website or watch the video linked below.

These are definitions that I use, and I think its in agreement with what others use.

Node: This is the standard Monero node. This means you are running the Monero daemon, the piece of software that connects to the other nodes on the network. Ideally, this software is being run on a computer where the incoming p2p port, 18080, is open, so that other nodes can connect to you.

Full node: This is somewhat semantics, but this implies that you are running a Monero node.

Mining node: You are running a full node and you are also solo mining

Open node: This implies that you have opened your RPC ports to the network, so that others can connect their wallets to it.

Remote node: This is how you would refer to an open node if you are the user of an open node. Alice runs an open node, and Bob connects to Alice's open node so he is using a remote node. Or, Bob could run his own node on a server and connect to that remote node from his home or phone.

Public remote node: This is how you would refer to an open node run by someone other than yourself that has their ports open to the public. Bob is connecting to a public remote node that he doesn't operate or know the owner of.

Monero Network and Blockchain Interface This is my preferred name for the monero node software. This definition is definitely not in agreement with what others think. But don't you think its more descriptive?

Glory days are upon us. Randomx allows everyone with a CPU a good shot at mining something worthwhile